Youtube is the biggest video platform on the internet. There are approximately 4 billion video views a day – that’s 4 billion opportunities for marketers to get their message to their audience – way more than any other online platform or television station. This figure alone is a good enough reason to consider giving YouTube advertising a go.
But as one among tens of thousands of advertisers on the video hosting platform, and the skip button acting as every marketers enemy, how can you get your message across as effectively as possibly?

1. Be Authentic
Consumers are much smarter when it comes to advertising then they have been in the past, and can usually smell bull**** a mile away. The second a consumer suspects you’re putting on any kind of front, they’re not going to trust you and they’re not going to buy your product. Say what you mean, don’t promise more than you can deliver, and use personality to your advantage. Real life personality, flaws and all, makes a brand seem more relatable and personable to the consumer.

2. Make it Interactive
Youtube is a platform that allows a lot of possibilities when it comes to the nature of ads, so make the most of it and get your audience involved in your brand. Consumers. are they going to have a much higher recall rate if they are actually do something rather than just seeing something. Click the pair of jeans they like best and it’ll take them right to the purchase page. Have a playable game linked into the ad. Who doesn’t love it when you click into Google and it so happens that the Google banner is a keyboard you can play and interact with rather than just a stationary word? No one. That’s who. 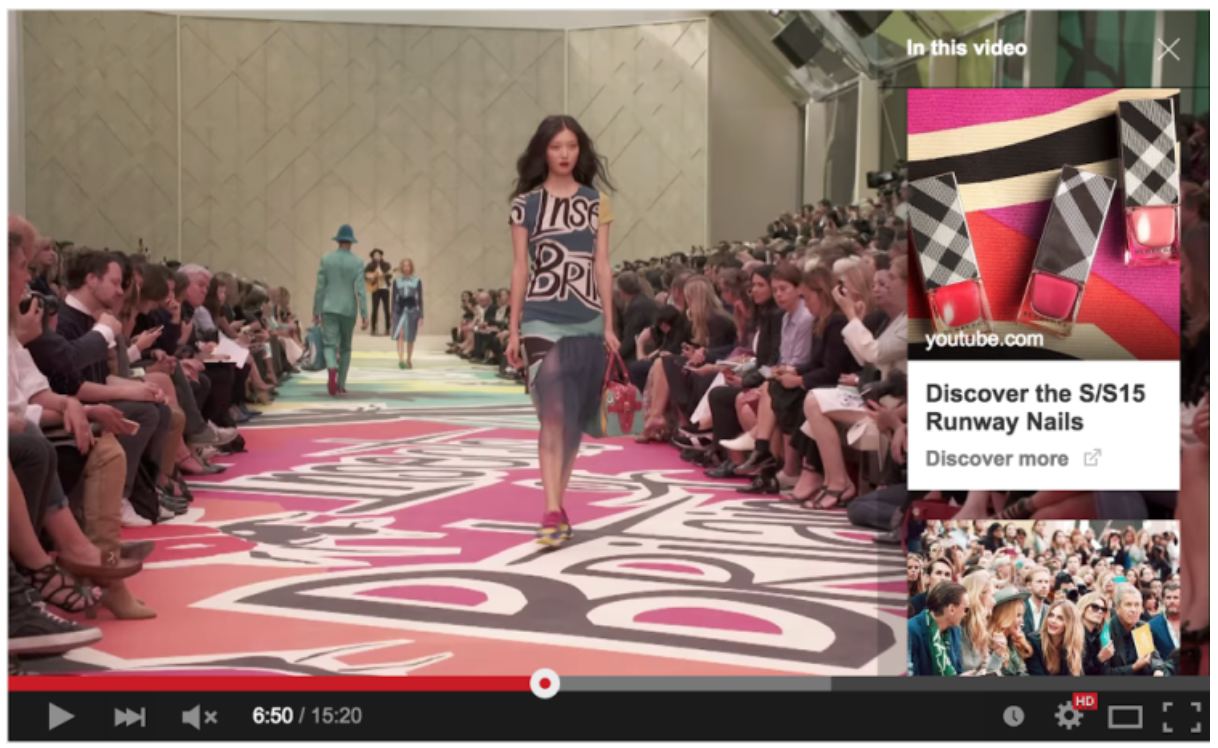 Interactive cards introduced this year into YouTube’s 5 year old advertising format TrueView, allowing the viewer to buy what they see the model wearing in the ad

3. Take as long as you need
Many of the most watched youtube ad’s in recent years have been longer than your classic 30 seconds – in fact the top 5 youtube ads of the last decade , as voted by users of webbyawards.com (and in conjunction with Google), were all more than a minute long.
If you think you can fit an effective message into 15 seconds and keep it short and sweet that’s fine, but don’t be afraid to take a little bit longer to flesh it out and create a connection with your audience.

Dove’s Real Beauty campaign ads were all longer than your average ad, but the “Like A Girl” ad was by far the most popular (It currently stands at over 58 million views), and came in at 3 minutes and 18 seconds.

4. Think story-teller, not marketer
Ads are more likely to get watched if people actually want to watch them, and the best way to capture interest is with something interesting. Creating something with a beginning, middle and end, with ups and downs, emotions and actions, will make the viewer forget they’re watching an ad at all, meaning brand exposure for you and entertainment for them.

A great example of this is Chipotle Mexican Grill’s “The Scarecrow” ad, which includes a dystopic world, a turning point and a happy ending. The brand name is only flashed by 3 seconds at the end of the ad, but by that point people are drawn in and paying attention, making it way more effective than if it was displayed at the start.

What are some of the most memorable YouTube ad’s you’ve ever seen? What did you like about them most?