How to market to young people

Before I start talking about how to market to “young people,” you should know that I fall into this category. I’m talking about 16 to 25 year olds (of which I am one), and the occasional immature 30 year old, not children. That’s a whole other ethical issue that I won’t touch.

So what exactly makes young people so difficult to market to and different to other audiences? There are a number of reasons to address, but we’ll begin with short attention spans. As I am in this group, I can tell you – it’s absolutely true. We are becoming more and more dependent on having multiple forms of entertainment at any one time, so we are never fully focused on one. Just yesterday, I was watching a Friends rerun while playing games on my phone and maintaining a conversation with my housemate. I couldn’t tell you what he was saying to me (sorry, Frank), what episode it was or whether I won the game or not. Splitting attention like that means we are taking in and remembering less of it. 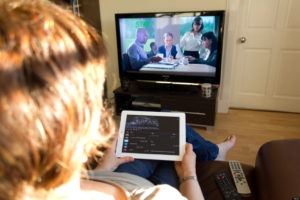 It’s common for people to use multiple platforms at once.

Now, as a business, try cutting through all that to capture my attention. Sounds impossible, right? Saturating the media with your advertisement is a waste of time and money. Instead, consider what types of media I’m consuming. Television probably isn’t the best way to reach me anymore. I turn away during ad breaks, but think about what I turn to. I’m regularly scrolling through my news feeds on a variety of social networks – Facebook, Instagram, Twitter, Tumblr, Pinterest…the list goes on. It’s time to reconsider how you reach this elusive market.

Another point to consider is how you speak to young people; the voice you choose to use. The quickest way to isolating yourself from your teenage audience is to speak to them like they’re children. Teens prefer to take advice from their peers, not their parents.
Sounding like a peer has to sound natural and not forced. When the New South Wales released their brilliantly awful Stoner Sloth campaign, they thought it was something teenagers would have a bit of a laugh at but also take a message away from.

In case you missed it:

Instead, it turned into a $150,000 laughing stock and made no difference to the rates of marijuana use among youths, going viral for all the wrong reasons. The attempt at relating to young people and speaking in their language just came across as patronising.
The easiest way to avoid this is to understand that you will never naturally sound like a teenager. Knowing that, don’t try to. Talk to them like they’re adults and maybe they’ll listen, but at the same time, remember where they’re coming from and what interests them.