I have watched more political video ads these past few days than anyone should ever be exposed to. This time has not been wasted, however. I have learnt some valuable lessons along the way.

1: It’s easy – and pretty effective – to attack the competition

What the politicians taught me:
I’m certain this wouldn’t be such a popular tactic among politicians if it wasn’t foolproof.
Pick someone you are in direct competition with. Find something out about them that differs from your own beliefs. It is important to note that this does not necessarily have to be a bad thing – just different. Now, spin it to be negative.
Voila! You have successfully used video to turn your audience against the competition and therefore towards you. This will definitely not backfire.

Why the politicians have it wrong:
Research actually suggests an attack campaign will turn consumers against you. You are showing an ugly side to them that has a huge potential to drive them away. However, if everyone else is attacking you, it can be hard not to retaliate.

2: Actors are an unnecessary expense

What the politicians taught me:
I was once told by my high school media teacher, “If you want people that look like real people, hire actors.” This is nonsense. Actors are expensive. Real people are cheap. You do the maths.

Why the politicians have it wrong:
My media teacher was dead right. Real people are clunky, they don’t know where to look, they stutter and they drag out the filming process by taking too long to perfect a shot. Actors are a worthwhile expense.

3: Be vague to relate to as many people as possible

What the politicians taught me:
The more people that can agree with your point of view the better, right? Right. The best way to do this is to avoid making bold, controversial statements and stick to the safe option. If your video leads to a face to face question, do everything within your power to avoid the issue. Confuse them with your reply and let them hear what they want to hear.

Why the politicians have it wrong:
Know your audience. It is unlikely you’re trying to sell your product to the entire internet, so there’s no need to appeal to all of them. If you’re selling to teenage girls, it doesn’t matter if your middle aged male neighbour relates to the company’s ideals.

4: Making memes is the best (and only?) way to connect with youths

What the politicians taught me:
As far as I can tell, this is the only way to connect with young people. Make hilarious memes that will make them laugh but also make them remember you. This ties back in with lesson 1. Memes are an easy medium to attack the competition.

Why the politicians have it wrong:
Relating to young people when you are not one is difficult – I understand that. But they will see through a tacky attempt in a second. Memes are rarely successful (which the exception of Labour’s “Out of Touch”) or memorable. Using social media is important, but don’t treat young adults like children or idiots in your video. They will disconnect with your brand and you will lose touch quickly. 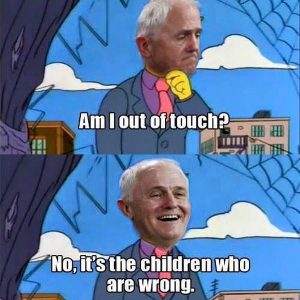 If you’re looking for more ideas of what not to do, political campaigns are a candy store. Here are the major parties’ Youtube channels: